The year 2019 is about to end. Remembering the good times we have experienced at the festivals, we want to top some of the best events in Spain we have seen in recent years.

Given the wide variety of festivals and their ambience, venues and types of music, we will focus our article on indie-pop-rock festivals held here. The intention of this article is to compile the most significant aspects of each one without wanting to rank them. We know that the best festival is the one that each one went to, in the company of the people each one likes the most, and that offers the music each one loves and celebrates the most. With that in mind, these are our highlighted festivals:

Held on the outskirts of Madrid in an immense and very comfortable artificial turf enclosure created for the occasion, Mad Cool  is one of the biggest festivals in Spain and one that hosts the biggest number of festival-goers. Despite the problems in its first edition in the new Valdebebas site, in 2019 the organization successfully remedied them by improving transport services. In addition, it was announced that 2020 will feature 4 days of concerts with an excess of +60,000 daily attendees.

Stages, screens, tents, catering and everything at Mad Cool  is big, and of course, the lineup as well. Since it started in 2016, it has been possible to see shows by mythical bands that rarely performed in Spain, like The Cure, The Smashing Pumpkins, The Who or Pearl Jam, amongst others.

The 2020 edition will take place on July 8, 9, 10 and 11 and the first names announced are Taylor Swift, Pixies, Jamie Cullum, Paul Weller, Foals, Billie Eilish, Twenty One Pilots, Khalid and many others.

Pre-sales available from November 27. Subscriptions for sale from December 1. Buy your tickets here! 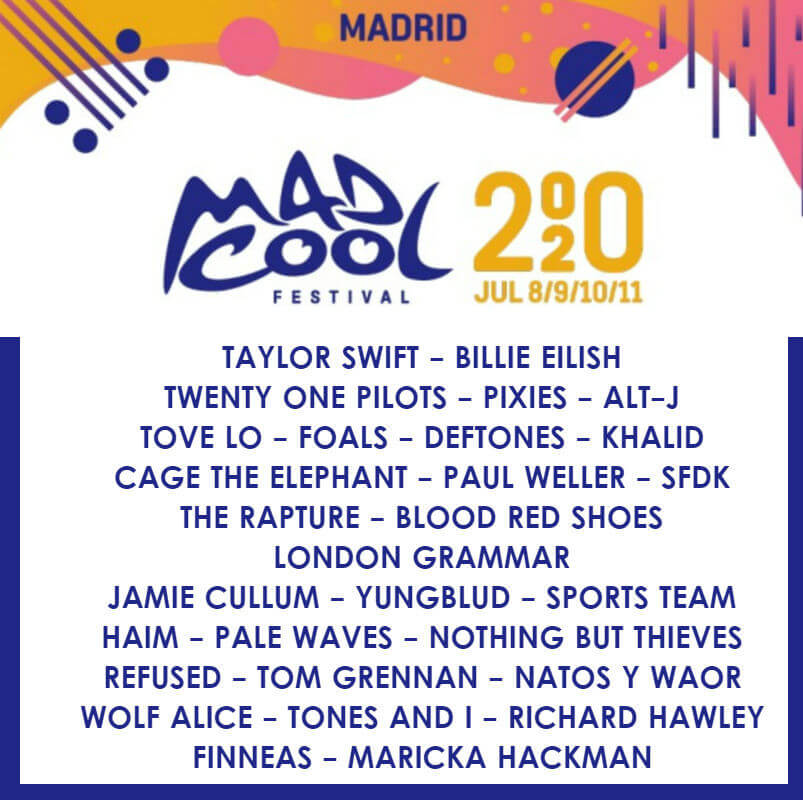 The most cosmopolitan festival is celebrated at Barcelona's Parc Del Forum, near the Mediterranean Sea. Here you can live in one of the most modern and avant-garde ambiences of all Europe. For this reason Primavera Sound has been transformed as a mandatory event on the calendar of every trendy-people over the last few years, as well as encompassing a symphony of activities related to art and avant-garde culture.

Musically speaking it brings together a wide range of bands and artists of all genres (rock, indie, electronic, underground, ..). Arcade Fire, Arctic Monkeys, Björk, The Strokes, Nick Cave, or The Black Keys are just some of the bands that have performed at Primavera Sound. The 2020 edition will mark its 20th anniversary so there is a whole state of secrecy surronding the lineup but hopefully we'll hear great news sooner than later.

In short, Primavera Sound is a must-attend festival for at least once in a lifetime.

The next edition of the festival will be celebrated from June 3 to June 7, 2020. The first band revealed is an exclusive Pavement reunion. With the announcement, early bird tickets were put on sale for a promotional value.

FIB (or International Festival of Benicassim) is one of the first festivals in Spain, held in the town of Benicasim, Castellón. With a very international audience, camping area and beach proximity, festival-goers can enjoy a very special and party like atmosphere. FIB has earned its reputation as a great festival by featuring amazing lineups that will go down in history. Its Maravillas Stage has seen the likes of memorable shows by Muse, Placebo, The Killers, Oasis, Radiohead and a very long etcetera.

After a strange 2019 for the festival and several uncertainties about its future, the new organization is asking fans, via survey, for their best wishes for next year's lineup. We hope that this marks a new direction and that FIB gets on tracks again to be back as an emblematic festival. Let's feel the magic of FIB again.

FIB 2020 is set to take place in July, 16-19 and the first wave of artists has been announced featuring Martin Garrix, The Libertines, Armin Van Buuren, Vampire Weekend, Khalid and Don Diablo, among others. 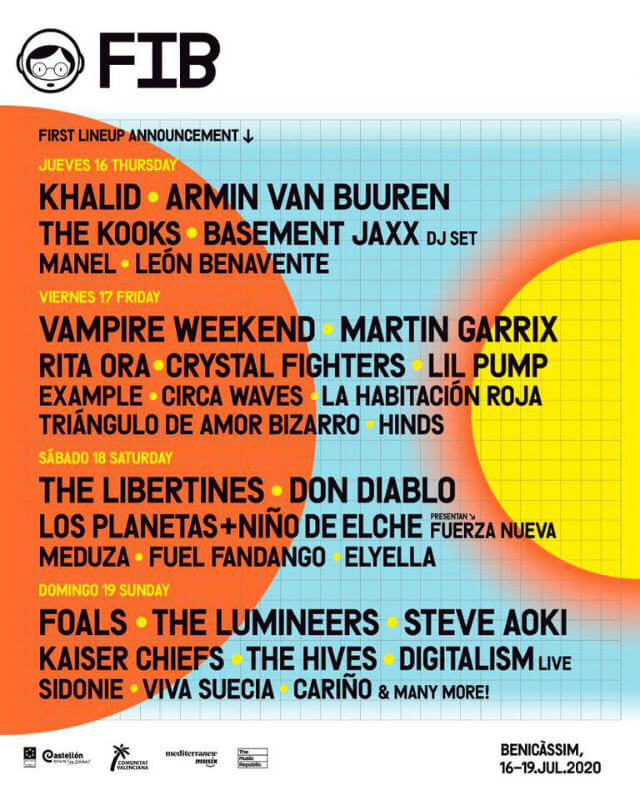 Low Festival is one of the most balanced festivals in terms of national and international acts. It is celebrated along 3 days at the end of July, and in any of them people can enjoy high quality artists. 2020 has started strong with the first confirmations that include Two Door Cinema Club, White Lies, Primal Scream, Rufus T. Firefly, Viva Suecia or Sidonie. In addition, Benidorm is always a plus when it comes to achieve a young and public atmosphere ready to party. Low Festival never disappoints.

Honoring its own name, tickets are available from only €60 and for VIP pool passes with a relaxation area for only €179.

Low Festival 2020 is back from July 31 to August 2 at the Guillermo Amor Sports City in Benidorm. 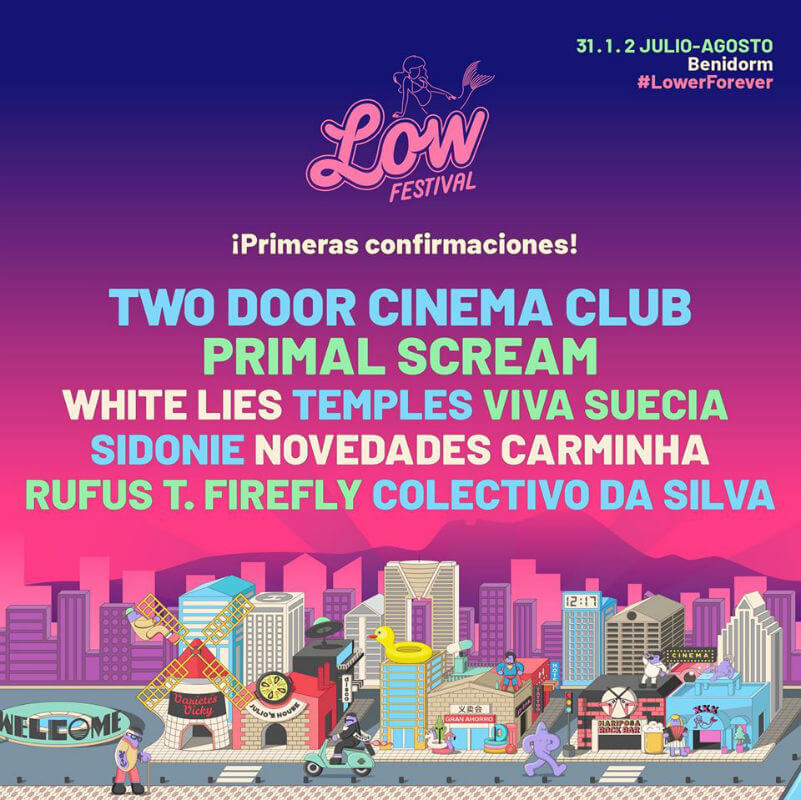 Aranda del Duero, in Burgos, becomes the capital of the Spanish Indie scene in mid-August. Music and activities go beyond the site limits and the town is a stage itself for all its squares and venues. Since the early hours of the day you can enjoy an atmosphere of cañas (beers) and tapas enlivened with live music. The Plaza del Trigo becomes the stage where all Spanish indies groups want to succeed. The lineup will be revealed on November, 28 so, for now, there are no confirmations for 2020 yet but usual attendees at Sonorama know that their surprise concerts and indie atmosphere is breathed for sure and will be worth it.

Warm Up is one of the first festivals on the calender. The appointment of first of May is the one that warms up the motors of the Spanish summer festival activity. Murcia is one of the cradles of major national bands and that makes the musical culture high, as well as the level of the festival. Until now the organization has announced the likes of Modeselektor, Mando Diao, Johnny Marr, Dorian or Viva Suecia. Still with few confirmations and payments from €45, surely the cozy city of Murcia will pick up good concerts such as the last edition with Vetusta Morla, Teenage Fun Club or The Jesus and Mary Chain. If you are one of those who have a long winter without festivals, this is your festival. 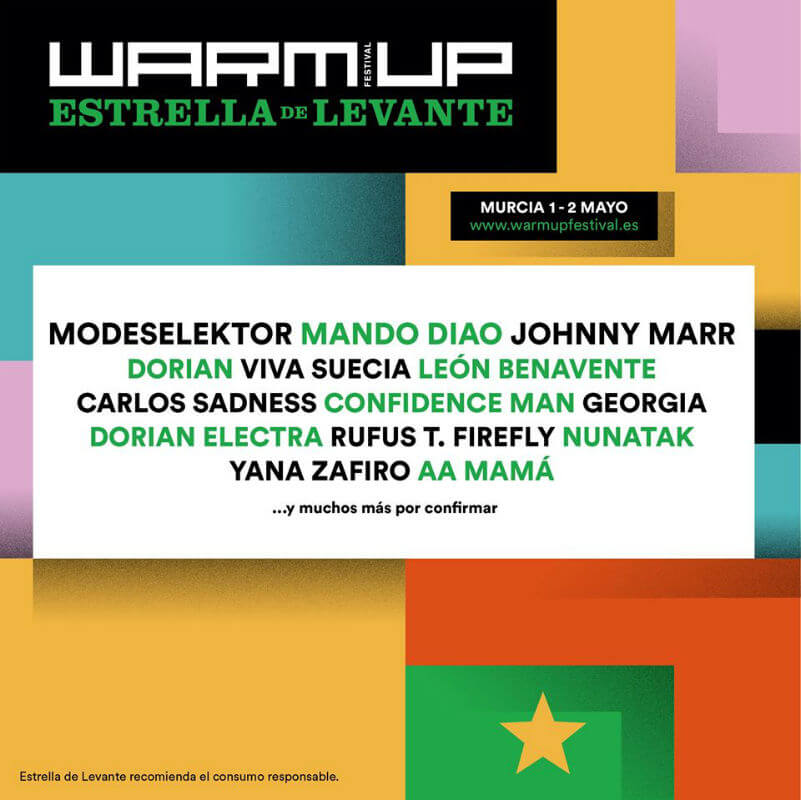 BBK Live Festival is celebrated in July in an amazing environment surrounded by trees and with a slope of natural grass where you can enjoy the concerts. The festival gives you the opportunity to camp next to the venue with frequent free buses between the two spaces. Indie-rock music in a natural environment, tents with DJs and the amazing gastronomy of Bilbao, together with a good organization are the keys to success of Bilbao BBK Live. However, it is necessary to keep in mind the logistics to get to the site as it can not be accessed by car.

The 2020 lineup is yet to be announced but in the past, BBK Live has offered bands and artists such as the Gorillaz, The Strokes, Childish Gambino, David Byrne, Alt-J and many others. The next installement is set to take place on July 9, 10 and 11.


Hopefully we helped you decide which festivals to watch in 2020 in Spain, as ticket sales and the first lineup confirmations have been made.